THE Energy Source For Your Live or Virtual Events

You need to get your team together for your annual event and with this “crisis” you are scrambling.

You’re wondering how you can really have great energy and interaction if you choose a virtual option.

You need to kick off and close your event with energy, certainty and a call to action.

You don’t want a “rental speaker”; you need a partner who can really help.

You know a typical “webinar” is not what you are looking for.

You want to explore how to pull off a “HYBRID” option of a live AND virtual option.

What People Are Saying About Chip's Virtual Programs

“Chip he was so great at our live Sales Kick-Off that when Covid-19 happened we reached out. He took their focus from the fears of Covid-19 and the business interruption to positive ways to WIN in these stressful times. Chip is a difference maker for i3 Verticals.” 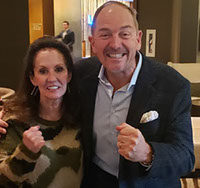 Rated Top 5 Speaker for 3 years In A Row By Speaking.com

How To Put On The Best Event Ever

Your opening/closing speaker will make all the difference

1. Watch Chip in action and check out his written and video testimonials.

2. Call Chip to discuss your unique needs and how he can add the most value.

3. Get an interactive, high-energy tailored presentation and have your best event ever.

That Your Event Won't Be a Flop

“You invested the time to understand our culture. You've inspired everyone to not only be better bankers and leaders, but to be their BEST self always! You kept the session full of energy with a good mix of content and humor.”

“His presentation was engaging, interactive and peppered with just the right amount of humor. He took the time to research our industry and his message was spot-on. The Board Break Experience was amazing.”

“You really got our resellers thinking differently and motivated them to make some serious changes about life, the way they handle referrals and documenting their success. You were rated a 5 out of 5 and one gave you a 27!”

Get the latest from Chip Eichelberger

Most event planners cross their fingers and HOPE the speaker will deliver on their promise to exceed expectations and make they look like a genius for hiring them.

Chip partners with you to create customized workshop-style event openings and closings that ENERGIZE and engage each audience member to ignite change and lasting transformation – personally and professionally. No “rental speakers” here!

Chip began his speaking career after 4 award-winning years as a sales rep for Jantzen Sportswear. He went to work with the world renowned Tony Robbins in San Diego, winning Sales Leader of the Year twice. He hired, trained and led sales teams around the U.S. and eventually became Robbins’ international point man, building the brand in Australia and the United Kingdom.

With that success, he launched his own brand and has spoken in every state (except Maine), every Province of Canada many times, and eight countries. He’s delivered over 1,000+ high-energy presentations for organizations and associations like State Farm, Hyatt, DOW, Harley Davidson, PriceWaterhouseCoopers, RE/MAX, Smoothie King, Honey Baked Ham, Mass Mutual, Wells Fargo, Campbell’s Soup and Blue Cross/Blue Shield, Great Clips, DOW, The Campbell Soup Company, Exxon, NADA and PMI – and many more.

Over the last 24+ years of speaking, Chip has received the Certified Speaking Professional designation. This is the highest earned designation given by the National Speakers Association and held by only 7% of their members. Chip was also chosen by his NSA peers to close their CSP/CPAE Summit in January 2015, a tremendous honor. Speaking.com ranked Chip as a Top 5 Speaker three years in a row.

Chip is most proud of the hundreds of video testimonials he’s collected from meeting planners and event organizers over more than two decades of opening and closing events that showcase how he gets audiences switched on, motivated, and transformed.